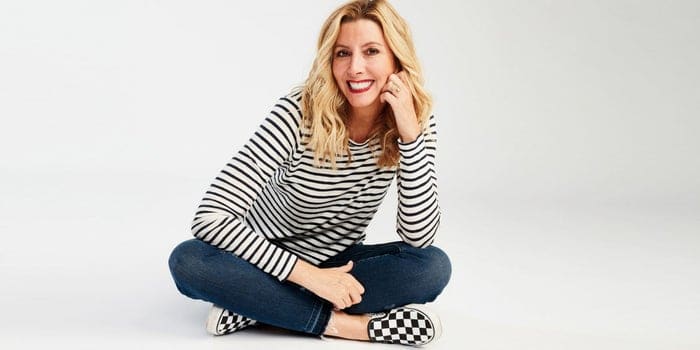 I have to set the stage for you, on where I am in my life at this moment. I’d never taken a business class or worked in fashion or retail. I’d actually been selling fax machines door-to-door for seven years, since graduating from college and had $5,000 in savings and I’d just moved out of my mom’s house.

I spent all my hard-earned money on this one pair of cream pants that hung in the closet, and I decided to cut the feet out of control top pantyhose one day, and I threw them on under my white pants, and went to the party. I looked fabulous, felt great and I had no panty lines, I looked thinner and smoother, but they rolled up my legs all night. And I remember thinking, “This should exist for women”.

Here I am, selling fax machines, door-to-door, and I had no one to turn to, or to ask about my idea. So, I actually went on the Internet, and I looked up “hosiery mills”. I got on the phone, and I started calling all of these hosiery mills to, “Please help me make this idea of this footless, pantyhose-shaper concept”. I tried that for several months with no luck.

I liked my idea so much, and wanted to protect it, so I decided to patent it. I looked up Patent attorneys in Georgia and wanted to find a woman patent attorney as I thought it would be much easier to explain my idea. I couldn’t find one and The Chamber of Commerce actually said there wasn’t a single female patent attorney right now in the whole state of Georgia.

I took my lucky red backpack with me on every step of the journey, and I went and met with three different law firms that I had looked up online. I presented my idea to these men trying to explain how I’m gonna make women’s butts better, and an idea that everyone would love.

All of the attorneys that I met with, they wanted between $3,000 and $5,000 to patent my idea and I only had $5,000 total, in my savings, to do this idea. I went to Barnes & Noble on Peachtree Avenue in Atlanta, where I lived, and I bought a book called “Patents and Trademarks”, and I started writing my own patent.
While writing my patent, I took a week off of work at the company I was working for and drove to North Carolina (where the bulk of hosiery is made in the US) to try to convince somebody to help make my idea. After cold calling these mills for a week, I went back to Atlanta with no luck. Two weeks later I got a phone call from one of the mill owners who said “Sara, I have decided to help make your crazy idea.” When I asked him why he had a change of heart, he simply said, “I have two daughters who love the idea”.

That set me on a journey of trying to make the prototype. Working at night and on weekends I learned so much as a consumer in the process of trying to make my product and remember thinking, “Where are the women? Why am I not speaking to any women here?” Then it dawned on me that maybe that’s why our pantyhose had been so uncomfortable for so long because the people making them aren’t wearing them.

With Spanx I started testing my prototypes on real women, my mom, my grandmother and all my friends. To this day, all of the Spanx products are obviously tested and worn by me and all of my friends and family and I really appreciate that honest feedback, it’s what makes us better than what had existed out there.

I went back to the patent attorney and I said to him, “I have written the entire patent and drawn the abstract. My mom was an artist and drew the outline of my body wearing the product ’cause you have to submit a picture with your patent. I don’t know how to write the legal claims portion so for a discounted price, the attorneys I had met with agreed to do it for $700. I actually submitted my own patent online and put the finishing touches on the prototype.
For the next couple months, every day, I’d come home from work and develop the packaging. I knew that I wanted my package to be red, and bold, and different because everything on the market was beige, and white, and gray, and had the same half-naked woman that had been on every package for the last 40 years. “I had no money to advertise and knew when I got my chance for this product to be on the shelf “It’s gotta scream, I’m new, I’m different, check me out.”

So, that’s what I did and when I made the revolutionary red packaging that no one had ever done in the hosiery space, and I put three animated illustrated girls on the front that looked totally different and that too was revolutionary at the time.

I remember, after I finished this masterpiece of a product and the packaging for myself, I thought, “I love it, it’s perfect. It makes me feel like I’m buying a present for myself. I added the size chart and I added a few key things to the back of the package and had spent about a year and a half coming up with really bad names. In fact, the runner-up to Spanx was Open-toed Delilahs.

I just decided to narrow down my thinking and this is how it happened. I knew at the time that Kodak and Coca-Cola were the two most recognized names in the world, so I started playing with them. What do they have in common? They both had a strong “k” sound in them. And then I read that the man who started Kodak liked the “k” sound so much that he put the “k” at the beginning and the end of his word, and started playing with letters in the alphabet in the middle to come up with the word Kodak.

I also have friends that are stand-up comedians and it’s this weird trade secret that the “k” sound will make your audience laugh. So, in that moment, I put all that together and said I want my invention to have the “k” sound in it and literally, almost spontaneously the word “spanks” came to me while stuck in traffic in Atlanta.

I pulled up to the side of the road, wrote it on a scrap piece of paper and thought “That’s it” and on the way home that night and I made a decision to change the “ks” to an “x” because I had done some research prior that made-up words do better for products than real words do and they’re also easier to trademark.

I went to my trusty website that I’d spent a lot of time on for United States Patent and Trademark Office dot government, and I typed in the word “Spanx”, S-P-A-N-X. I typed in my credit card, and for $350.00, I was awarded the word “Spanx”.